Make your vote count for mental health in the upcoming election

Make your vote count for mental health in the upcoming election 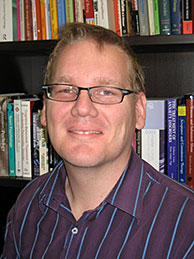 In a little over two weeks, Australia heads to the polls to elect a new Federal parliament.  There are a lot of issues in play, but for those of you interested in mental health we have a guide of what the big issues are, and where each party stands on each.

Before looking at the politics, let’s start by outlining the key issues.

Currently there are a number of existing programs that receive the majority of funding in order to achieve the above goals.  No party appears to be committing to any out of the box overhaul of these systems or any significant funding increases, so therefore it is useful to consider what these programs are and where they fit into the picture.

National Disability Insurance Scheme (NDIS) - exists to provide long-term inclusive support for people with permanent disabilities.  While many people with mental illnesses make full or partial recoveries, permanent disability is exactly how the needs of many should be viewed.  However, currently the NDIS appears to have a poor understanding of mental health issues, and a general fear of opening up the program to mental illness as it risks blowing out an already stretched budget.

↣ Needs - Directing some additional funding into the NDIS to deal with psychosocial disability is almost a prerequisite of good policy.

Primary Health Networks (PHNs) - were developed to allow regional differentiation in health coordination, on the assumption that the needs of one area may be different from the needs of another.  While the PHNs do not provide treatment directly, they do receive substantial funding, which they can then use to purchase treatment services based on the needs of their local community.  While decentralisation has been a huge step forward in terms of regional differentiation, significant questions have been raised about the capacity of all of these regional boards to develop competent financial and clinical governance.  Large administrative overheads, both for the PHNs and then the agencies they tender work out to is proving to cost more and deliver less to treatment.

↣ Needs - Good policy in this space would probably see a commitment to improved governance for the PHNs (simply rebranding them from Medicare Locals is not enough).  Additional resources directed to the PHNs without such improved governance risks achieving very little other than blowing out a bureaucracy.

Headspace - Strives to increase access for youth.  Their accessible centres are designed to be youth friendly and inclusive.  They have been modelled on the centre for excellence in youth mental health treatment in Parkville Victoria (Orygen).  However, recent evaluations have suggested that Headspace has struggled to “scale up”, meaning that while some of their centres are providing excellent services, many of them are underperforming, and outcomes have been underwhelming.

↣ Needs - Headspace funding needs to be assured.  The short-term funding arrangements that have defined its recent history are damaging to long term sustainability.  However, Headspace also needs support in delivering on its promise. Simply examping the model does not address the underlying problems.

Better Access - This is the program introduced in 2006 whereby GPs can refer directly to psychological treatment services and clients can receive a medicare rebate.  This program has been a huge success in terms of increasing patient access (almost doubling over ten years), however the only evaluation done on this program in 2011 was very limited in scope and does not really provide assurance that increased access has led to increased outcomes. A recent review by Lee & Frost published in MJA found that Better Access had reduced the rates of those suffering high levels of psychological distress, but that the session cap introduced in 2011 had decreased the program effectiveness.

This article can be accessed here - https://psychology-training.com.au/wp-content/uploads/2019/02/lee-and-frost-2019-public-domain.pdf 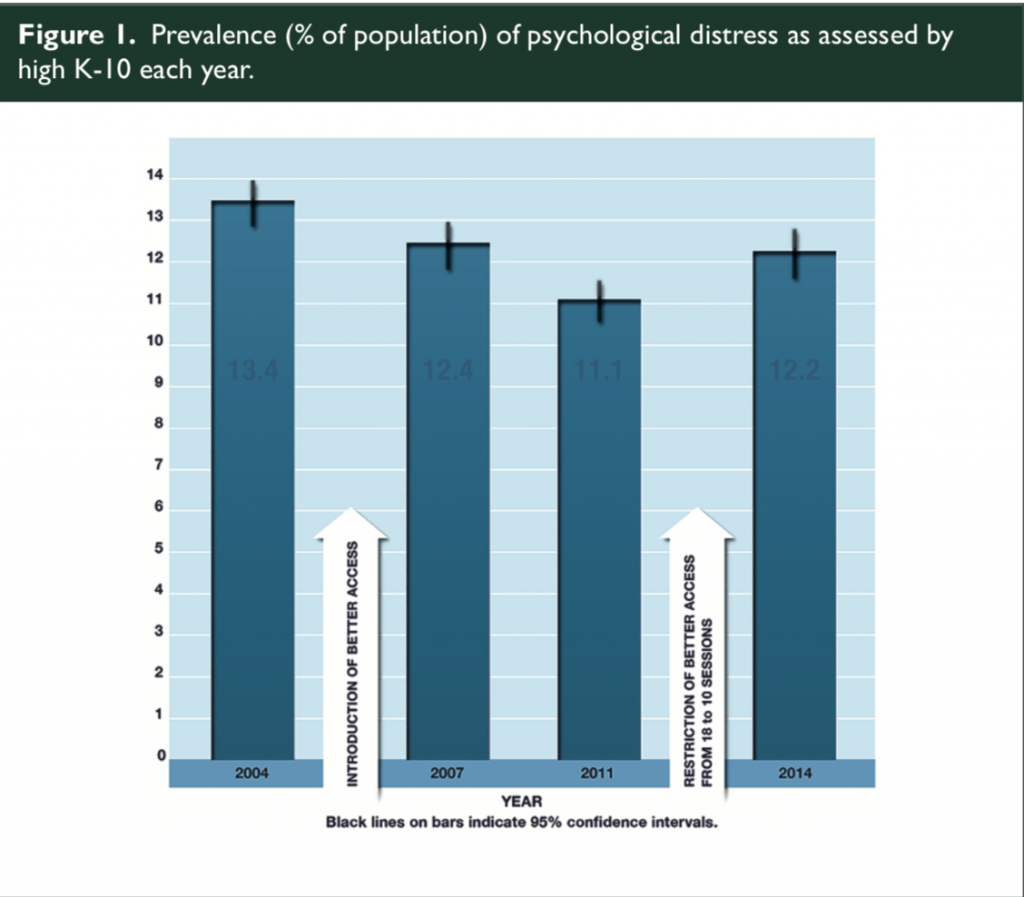 Web based platforms - There are a number of hubs that have formed nationally whereby organisations have been funded to collate apps, websites, phone counselling services and other treatment that can be delivered at almost zero cost.  These programs are understandably popular, both for their ongoing running costs, as well as their ability to reach people in regional and remote areas such as a teen who might be 100km away from the nearest GP, let alone a psychiatrist or psychologist.  However, web based platforms have yet to crack the drop-out problem, with research suggesting that in some programs as many as 90% of people do not return after their first interaction with the website.

↣ Needs - More funding dedicated to basic research.  These programs are promising, and will definitely have a place in the treatment mix of the future.  However, until the dropout problem is improved markedly they are not yet ready to be considered frontline treatment resources.

Public Hospitals - As the graph below shows, in 1992 public psychiatric facilities used to make up 46% of total mental health spending, but it has dropped and has been relatively stable at around 12% since 2010.  Australia now has 39 psychiatric beds per 100,000 of population, compared to an OECD average of 68.  No one is calling for a return to the bad old days of the asylum, but perhaps there is a bit of wiggle room between 39:100,000 and 68:100,000 to add a few more beds around the place.  However this is expensive, both in terms of capital expense and in terms of running these facilities.  Big dollars require state and federal co-operation, which has been in pretty short supply in my observation of COAG meetings.

What are the parties proposing?

From my reading of the policy documents, none of the major parties are offering any out of the box solutions to the problems suggested above.  None are committing to increased expenditure (and no I don't consider expenditure commitments made with a commencement date of over a decade to be anything other than wishful thinking), and none are offering any money to be spent in ways that are substantially more innovative than the programs listed above.

Seeing both Health Minister Greg Hunt, and Shadow Health Minister Catherine King debate at the National Press Club last week, it appears both had subscribed to the ‘dog ate my homework’ school of policy development.  Both said little, agreed to listen to experts and quickly pivoted to other topics

The Australian Greens policy paper in mental health was light on details and heavy on ideals and principles, but I did note a commitment to funding the NDIS to be able to provide services to those with a mental health disability.  While this is not the answer to all of the problems outlined above, it is certainly a step toward a more inclusive and less disabled life for those with severe mental health issues.

I also noted a recent ALP announcement that the NDIS funding would be increased and assured by putting aside money into the future fund to ensure there is money to meet its long term needs.  This is the only serious attempt I have seen to consider how the fund will be sustainable in the long term.  The LNP announced on budget night that the NDIS was already fully funded, but the growth rates used in their economic modelling seemed so optimistic as to be fanciful.

The Australian Labor Party - Their policy document has a lot of language around ‘regional’ driven policy, which I am interpreting as code for increased funding of the PHNs.  I am happy to be corrected on this, but my interpretation is that the ALP plans to put more resources into the PHNs in the hope that they will figure out how to solve local problems region by region.  There does not appear to be a plan to overcome the governance limitations of the PHNs.  This has the potential to be both costly and ineffective. The ALP has also committed to a target of reducing suicide by 50% in the next ten years.  This is an admirable goal, however the detail of how to do this are somewhat unclear.  It seems that they will be relying on the PHNs, and possibly another layer of regional structure to seek out and implement best practice solutions. Without more detail it is impossible to comment on this.

The Liberal National Party - The LNP made a commitment in the budget to a massive expansion of Headspace services.  These will be extended to an adult version of Headspace, and the total number of centres will triple.  This commitment was costed at $111 Million.  There is no detail of the minutiae of how this injection of funds will be used to deal with the patchy performance of some centres during an expansion phase that will be tripling their reach.  The LNP has aso committed money to trying to tackle suicide within Aboriginal and/ or Torres Strait Islander peoples, and importantly this money is to be managed and used by the communities in need.  While this doesn’t address the wider issue of suicide, this group of Australians are disproportionately represented in the suicide statistics, and the LNP are to be commended for this commitment.

One Nation Party - I was unable to find any specific One Nation mental health policies.  However, there was one policy designed to deal with the “Ice Epidemic”.  It involved life sentences for high level drug dealers, and empowering parents to institutionalised children regardless of age in specially built rehabilitation centres if they are addicted to Ice.

Palmer United Party - I was unable to find current information.  However, at the last election, they stood for increasing mental health funding by $4 billion dollars, and Indigenous health services funding by $5 Billion.  No details of how the money would be used were available.

(EDIT: I hadn't realised Clive Palmer had now rebranded his part as “United Australia Party”, who do not appear to have a mental health policy, but have a health policy that is similar to their 2013 mental health policy.  They commit to an $80 Billion dollar injection into the health system.  There were no details of what that $80 Billion would be spent on, and given that the only other economic policy of note was cutting taxes and raising the pension, it is hard to see how it will be funded, but I will leave economists to comment on that aspect.)

Overall - Unless there are significant announcements in the wings it does not look like any party is committed to a serious attempt at tackling the needs of the mental health sector.  Throwing more money into current systems and changing their funding mix slightly is unlikely to achieve any of the key goals of good policy.  Both the ALP and LNP are committing to outsourcing more of the problems to the PHNs and Headspace respectively, both of which are systems that hold great promise but are struggling with substantial teething problems.  The Greens probably have the most optimistic message and goals, however being so light on detail it is hard to give unqualified support for their platform either.

However you choose to vote on 18th May, make it count and enjoy your democracy sausage.

Share this ArticleLike this article? Email it to a friend!
Email sent!